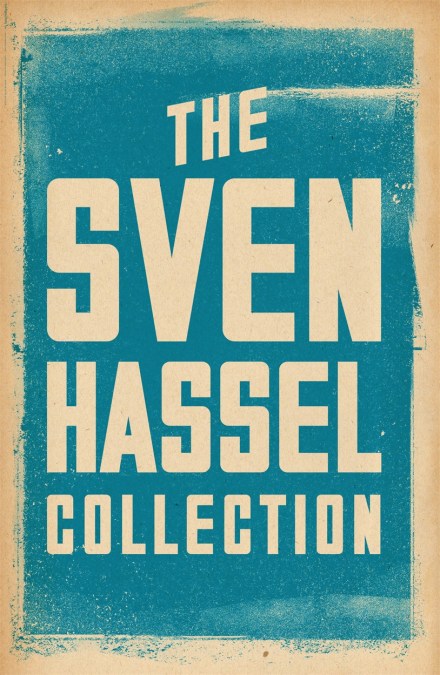 by Sven Hassel
From the fight for survival against the ferocious Red Army and the icy, shell-ravaged wastes of the vicious Russian winter, to the bloodiest battles on the Eastern Front, Sven Hassel’s gripping novels are based on his own experiences in the German army.

Convicted of deserting the German army, Sven Hassel was sent to a punishment regiment on the Russian Front. He and his comrades were regarded as little more than dispensable killing-machines, cannon fodder for Hitler’s war. His unflinching narrative takes us to the most extreme outposts of war, where soldiers face an inferno of blood and butchery. 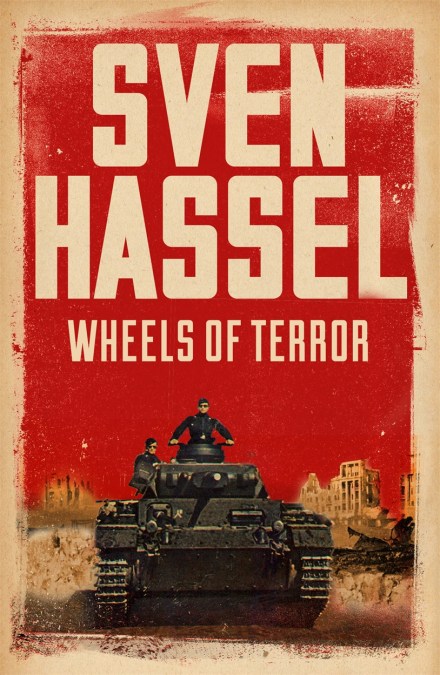 ‘This is a book of horrors, and should be left alone by those prone to nightmares. Sven Hassel’s descriptions of the atrocities committed by both sides are the most horrible indictments of war I have ever read … A great war novel!’ Alan Silitoe

Stationed on the Russian Front and now equipped with armoured vehicles, Sven Hassel and his comrades from the 27th Penal Regiment fight on remorselessly…

All of them should be dead: life expectancy on the Russian Front is measured in weeks. But Sven, Porta, Tiny and The Legionnaire fight to the end, not for Germany, not for Hitler, but for survival.

WHEELS OF TERROR is a sobering depiction of war’s brutalities, and the violence and inhumanity that the history books leave out. 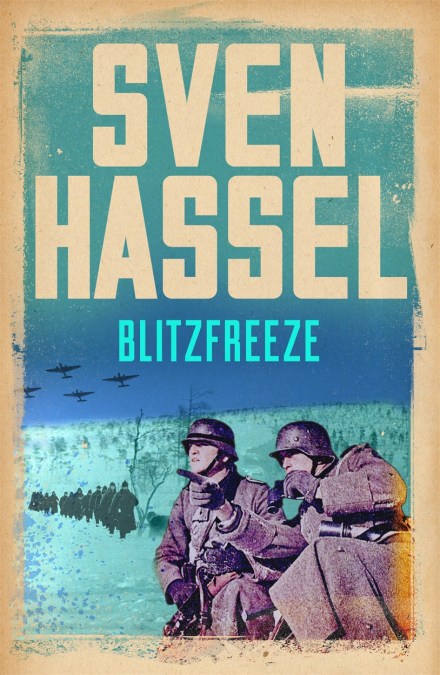 by Sven Hassel
A shocking insight into the realities of war, the conditions endured by ordinary soldiers and their unwavering solidarity.

It was supposed to be Hitler’s glorious conquest of Russia…

The 27th Penal Regiment has been ordered to invade the Soviet Union. They are half-starved and ill-equipped. To reach Moscow they must defeat the fearsome Red Army.

But instead, they find themselves at the mercy of an even deadlier enemy: the killer cold of the Russian winter.

As they advance across the icy wastes, they think only of survival. 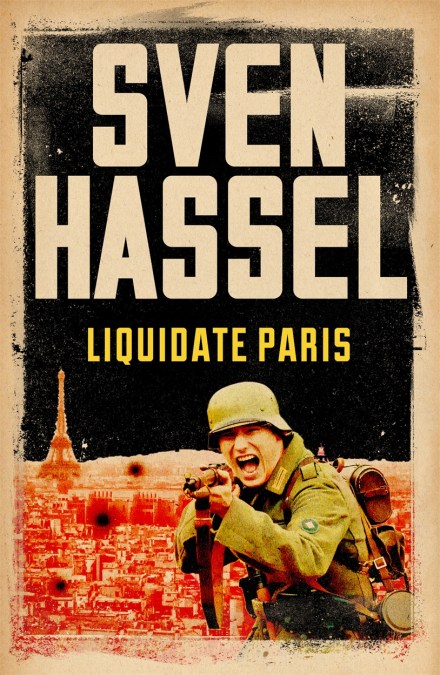 by Sven Hassel
LIQUIDATE PARIS shows the eruption of the Second World War in its most brutal and cruel phase, as allied troops advance upon Paris and the penal regiment retreat.

I had a grenade in my hand. So, no doubt, did the English private. I tore out the pin with my teeth. Lay there and counted. Twenty-one, twenty-two, twenty-three, twenty-four…

It is Hitler’s last chance to save the Third Reich…

Millions of Allied troops have landed in Normandy.

The orders are clear: Sven and his comrades, hardened by a savage war that has led them from the bloody steppes of the Russian Front, to the slopes of Monte Cassino, are ordered to withdraw to Strasbourg and destroy Paris on the way… 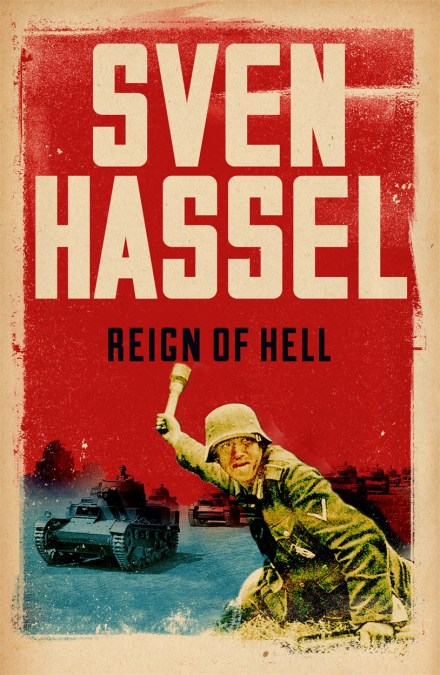 by Sven Hassel
A sudden curtain of silence fell over the burning city. All that could be heard was the steady crackling of flames…

Hitler’s penal regiments advance on Poland. Himmler has given the order: Warsaw must be razed to the ground.

But the Polish Home Army are not willing to give in to the German troops so easily.

As the city erupts into an inferno of flames and gunfire, Sven and his comrades find themselves caught between the sadism of the SS and the guerrilla warfare of the Polish Resistance…

REIGN OF HELL is a gripping insight into the Warsaw Uprising of 1944, and the bloodshed that ensued as the Polish tried desperately to liberate themselves from the German occupation. 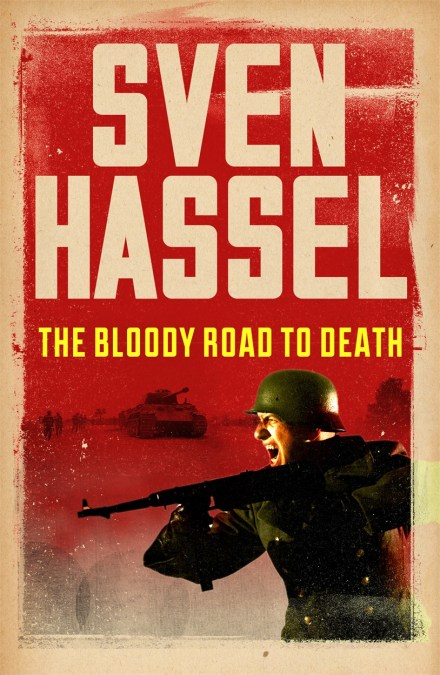 The Bloody Road To Death

by Sven Hassel
THE BLOODY ROAD TO DEATH depicts all the savagery of war punctuated with black humour, as Tiny, Porta and the rest of the men advance across Europe.

The Russian Officer falls forward and I sink my teeth into his throat. Blood runs down over my face but I don’t notice it. I am fighting for my life.

The 27th Penal Regiment are veterans of the frontline.

But when Hitler’s war takes them through Greece, Yugoslavia and Albania, they are entirely unprepared for what awaits them. And when the water rations run out, they are willing to commit murder just for a drink. 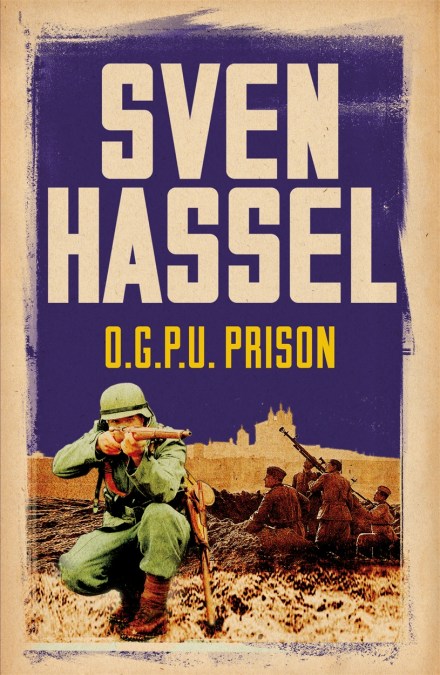 by Sven Hassel
The Russian uses his machine pistol like a scythe. Feldwebel remains standing for a fraction of a second. The rain of bullets pours into him, making him twitch violently. He falls to the floor. The Russian grins. There is no doubt that he is enjoying himself.

Sven Hassel and his comrades are ordered to take O.G.P.U. Prison in any way they can, even if it means killing the Russians with their bare hands.

Armed with flame-throwers and heavy artillery, the 27th Penal Regiment plan their attack.

O.G.P.U. PRISON is one of Sven Hassel’s most compulsively readable novels, full of battle scenes, written in the gritty style that Hassel is renowned for. 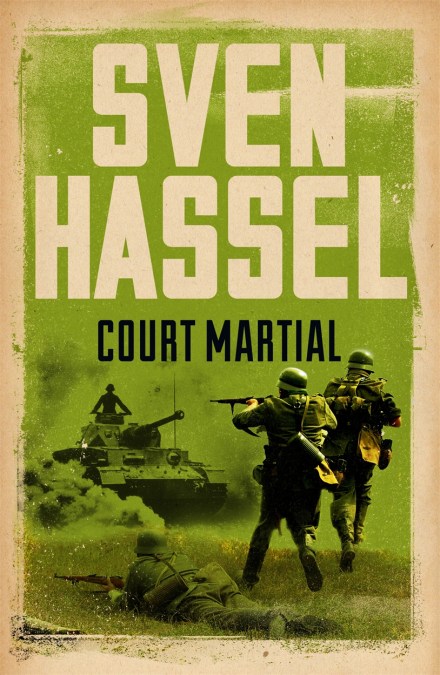 by Sven Hassel
‘They beat me,’ whispers the artillery officer, ‘Smashed my teeth in, sent an electric current through me. They want me to confess to something I never did.’

Sven Hassel and his comrades are fighting on the Finnish front, facing an arctic winter more ferocious than anything they’ve ever known.

But if they survive, they face shipment to Torgau Prison – the centre of Hitler’s penal system – where deserters, convicts and anyone showing anti-Nazi sentiments are imprisoned and punished.

This could mean arrest, court-martial and execution. Or it could mean torture and starvation.

COURT MARTIAL is Sven Hassel’s darkest novel and a shocking insight into the cruelty the Nazi regime inflicted on its own people. 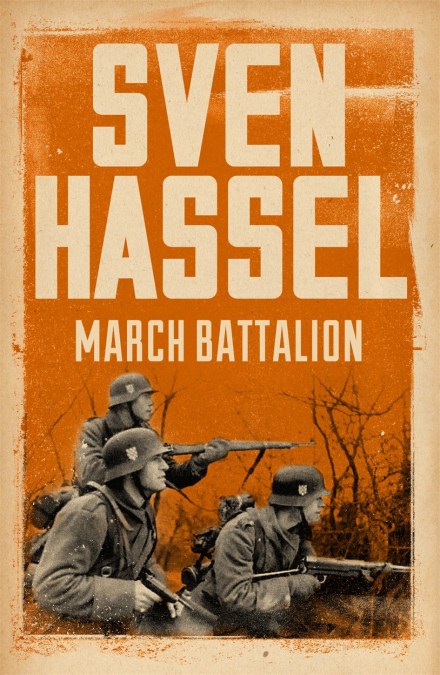 Sven Hassel and his comrades are once more hurled into the ferocity of the frontline.

The Eastern Front is a sight of unprecedented destruction. The soldiers there – the tank battalions of Hitler’s penal regiments – are considered expendable by the German high command.

This is a gripping testament to the soldiers sacrificed on the Russian Front. 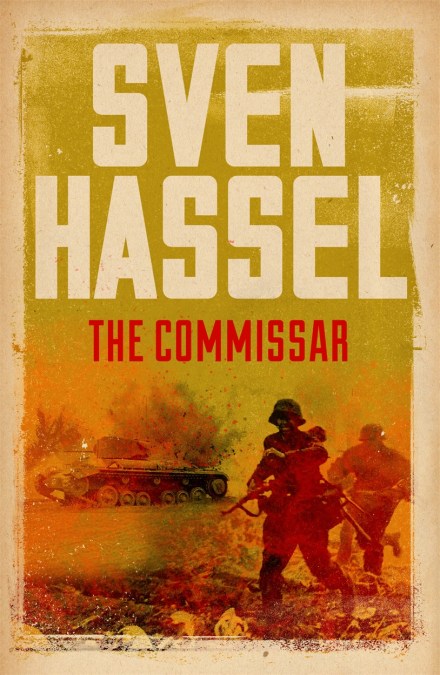 by Sven Hassel
A shocking insight into the brutalities faced by ordinary soldiers and the atrocities committed in the name of survival.

Dispassionately we stared at the bloody scene. It had become an everyday sight.

The 27th Penal Regiment care nothing for Hitler’s war. They fight only to stay alive. But then they uncover the Soviet Army’s biggest secret. A Russian commissar has hidden 30 million dollars of gold somewhere behind enemy lines.

In a madcap scheme, Porta brokers a deal with the commissar: free passage for the Russians in return for a share of the gold. To find it, Sven and his comrades must be prepared to lie, steal and go behind the lines of the deadly Russian army… 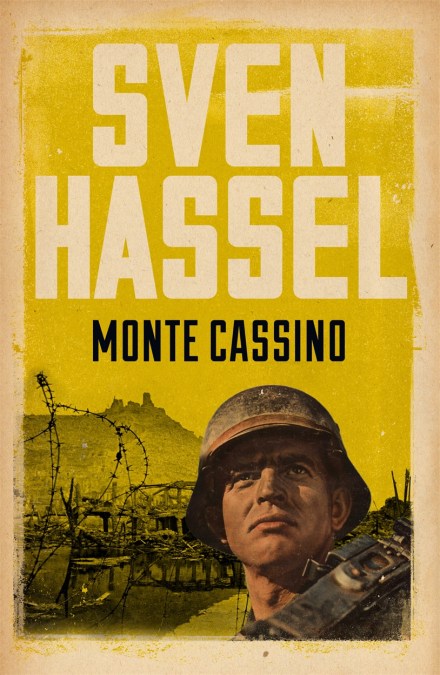 by Sven Hassel
Sven Hassel’s iconic novel about the Battle for Monte Cassino.

The thunder of the guns could be heard in Rome, 170 miles away…

Having survived the horrors of the Eastern Front, the 27th Penal Regiment are posted to Italy. Hitler has ordered that every position must be held to the last, and every lost position recaptured by counter-attack.

Monte Cassino – a major look-out post on the German defensive line – is under attack. In the face of overwhelming Allied firepower, Sven Hassel and his comrades are ordered to hold the fortress at all costs…

Sven Hassel based his unflinching narrative on his experiences in the German army. He ended the Second World War in a prisoner of war camp, where he wrote his first novel LEGION OF THE DAMNED. 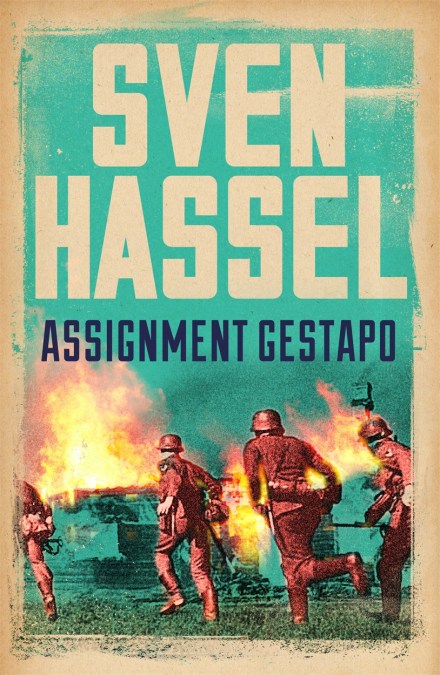 by Sven Hassel
A sobering portrait of the absurdity of the Nazi regime and the atrocities committed by Hitler’s secret police.

After months of fighting a savage war on the Eastern Front, the 27th Penal Regiment – men considered little more than criminals – are joined by German reserves.

A garrison has been attacked and occupied by Russian troops. The German soldiers have been slaughtered. Sven Hassel and his comrades are ordered to get behind Russian lines and massacre those responsible.

But this is only the beginning… Because then the orders change: the regiment are sent to Hamburg, where their next assignment is guard duty for the mercilessly cruel Gestapo… 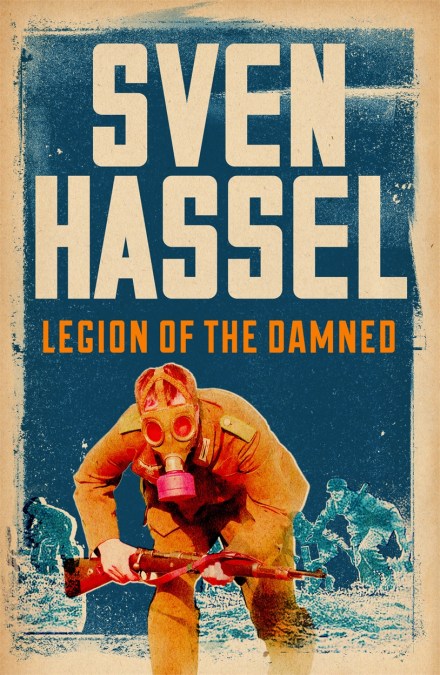 Legion of the Damned

‘An extraordinary book, which has captured the attention of all of Europe’ – NEW YORK TIMES

‘LEGION OF THE DAMNED is an incredible picture of totalitarianism, of stupefying injustice … He is graphic, at times brilliantly so, but never brutal or bitter. He is, too, a first-rate storyteller’ – WASHINGTON POST

Convicted of deserting the German army, Sven Hassel is sent to a penal regiment on the Russian Front. He and his comrades are regarded as expendable, cannon fodder in the battle against the implacable Red Army. Outnumbered and outgunned, they fight their way across the frozen steppe…

This iconic anti-war novel is a testament to the atrocities suffered by the lone soldier in the fight for survival.

Sven Hassel’s unflinching narrative is based on his own experiences in the German Army. He began writing his first novel, LEGION OF THE DAMNED in a prisoner of war camp at the end of the Second World War. 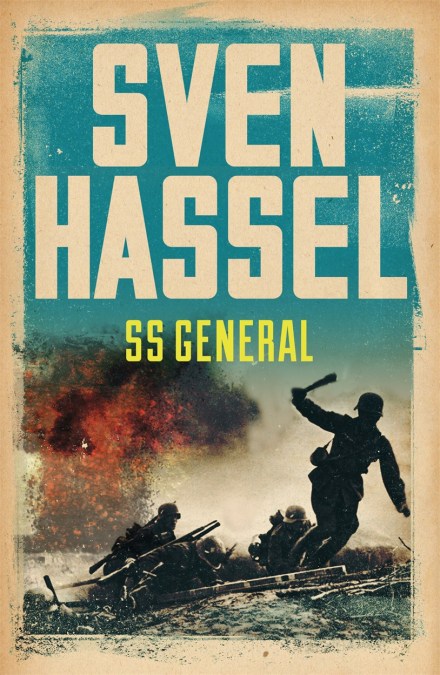 It was said that Stalingrad had been burning since August, ever since the first German bombs were dropped…

Sven Hassel and his comrades are plunged into the maelstrom of Stalingrad.

Radio Moscow reports that one German soldier dies every minute.

Trapped by the Russian counter-attack, starving soldiers must resort to cannibalism to survive. But ‘Tiny’, Porta, the Legionnaire and Sven attempt to break out, to fight their way across the frozen steppe.

Their leader: an SS general who takes no prisoners… 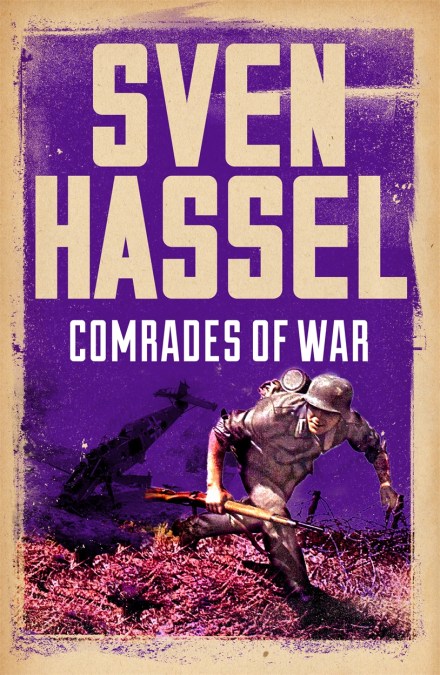 by Sven Hassel
There were not so much people as animals. Sometimes small and frightened, huddling together in cattle cars, wounds gaping, tongues swelling even as they licked the moist frost from the walls…

Grievously wounded – having survived the operating table and the perilous journey West on a freezing freight train – Sven Hassel and his comrades find themselves behind the lines in a Hamburg hospital.

The Reich is a hotbed of lies, betrayal and propaganda. Disgusted by the Nazi cause, the comrades drink themselves into oblivion, visit brothels where women dance naked on saloon tables and reach for home comforts before they return to the dreaded Russian Front. Because Hitler’s war must go on…

COMRADES OF WAR is a gritty portrayal of war’s harsh realities and the fear and fanaticism at the heart of The Third Reich.

Sven Hassel’s unflinching narrative is based on his own experiences in the German Army. He began writing his first novel, LEGION OF THE DAMNED in a prisoner of war camp at the end of the Second World War.
Next Page