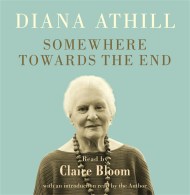 Somewhere Towards the End

What is it like to be old? Diana Athill, born in 1917, made her reputation as a writer with the candour of her memoirs. In…