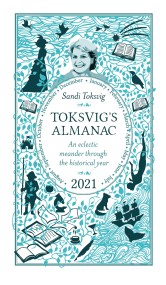 'Fierce, funny and long overdue - I read this book out loud to anyone who'd listen.' Adam Kay 'Toksvig's Almanac is intended merely as a…