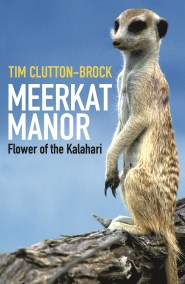 The life of the Meerkats - from the highly successful TV series, and soon to be released major feature film MEERKAT MANOR is the true-life…