Guaranteed already, this will be one of the best books I will read this year.
FANTASY BOOK REVIEW
An impressive work of fantasy, and one I think we'll be hearing more about. Highly recommended.
SF AND F REVIEWS
Vivid characters, visceral combat and a twist of an ending that I really should have seen coming and didn't (wizards are bastards and here's the proof). Brilliant use of magic as technology, too, like lightbulbs and water heaters. Excellent gender representation . . . Suffice to say, I bloody loved it and I am officially an Ed McDonald fan. He deserves to go far.
Elspeth Cooper, author of THE SONGS OF THE EARTH
Ed McDonald is an author to watch out for. I don't say things like this lightly. I read a lot of fantasy, and I don't hesitate to say that this will be one of the biggest fantasy debuts of the year. McDonald has given us the first instalment of what looks to be a very interesting series.
THE BOOK BAG
A very impressive debut, with complex characters and an imaginative setting that does much to impress the reader.
SFF WORLD
I heartily recommend this.
Adrian Selby, author of Snakewood
Overall, Blackwing is a fast paced novel that is likely to become a classic within the genre. It can be read as a self-contained story, but with a clear opening for the series to continue. This is the best debut novel in the genre this year. A joy to read.
STARBURST
Ed McDonald has taken something old and made it new... it's epic.
Fantasy Book Critic
A new author who, in my opinion, with this one book is going to blast onto the fantasy scene and prove that there is new talent out there.
RAPTURE IN BOOKS
Blackwing is a book that surprised me more than any other has so far this year. It's the debut of Ed McDonald and boy what a way to make an entrance.
SF BOOK
Freaking fantastic!
I SHOULD READ THAT
A cracking read - hugely entertaining, brutal but with real heart too.
Tom Lloyd, author of the Twilight Reign series.
A real fantastical page-turner.
SciFiNow
Their story moves at an (ahem) spellbinding pace.
SFX MAGAZINE
Blackwing is one of the greatest fantasy books I've read in my life. Perfect in every possible way. Ed McDonald is on a par with Joe Abercrombie and Brandon Sanderson. Cast aside whatever you're reading and start Blackwing instead.
BOOKNEST
I was completely hooked. It was viscerally real and the adventure kept coming.
SF CROWSNEST
A thoroughly engrossing read, I could barely put it down, I loved it and I want more.
LYNNS BOOKS
The reader takes an action-filled rampage through defense to attack, from injury to sorcery, faith to naivety and reality in what truly is a phenomenal start to a unique new series.
BRITISH FANTASY SOCIETY
If you like fantasy at all, then you simply must read Blackwing.
COVER TO COVER
This is dark, gritty fantasy, and it's been executed perfectly.
THE BOOK BUNDLE
Gritty and immersive, Blackwing is a hugely enjoyable tale
Edward Cox, author of The Relic Guild
Blackwing walks the line between post-apocalyptic fiction and fantasy, but still manages to inject a sense of wonder amongst all the grit. I hope Joe Abercrombie and Scott Lynch aren't resting on their laurels because there's a new blade in town
Gavin Smith, author of The Age of Scorpio
Fabulously inventive and at times horrifyingly funny and action packed.
MORNING STAR
Dark, twisty and excellent... Grimdark with heart.
MARK LAWRENCE 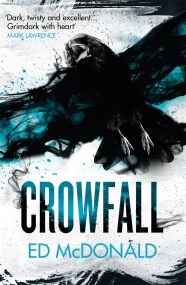 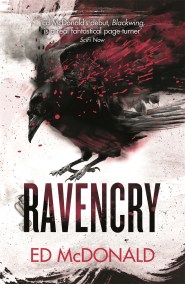 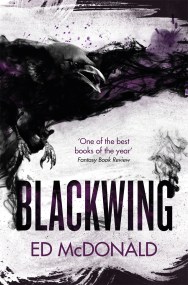