A first class SF thriller. Even though Peters wrapped up the case, I still wanted to know more about the universe of Magenta.
Peter F. Hamilton
Crime noir in the style of Blade Runner.
THE BOOK BAG
Peters has created a masterpiece here with his eloquent writing and fascinating characters.
RED HEADED BOOK LOVER
A masterly piece of writing and plotting that manages to merge classy space-opera with a police procedural as twisty as a Christie
Joanne Harris
Interesting and powerful
SFX
It's easy to see why FROM DARKEST SKIES has already been optioned for TV, what with its cinematic action and fast-paced plot, but the real strength lies in the humanity of its characters.
SciFiNow
Immersive SF, full of world-building detail, with a twisted love story at its heart.
Financial Times
A perfect example of what I like to read
THE BOOK BUNDLE
Peters' convincing world-building and a tense plot mean that this is a debut destined to make waves.
THE MORNING STAR
It reminded me... of Peter F Hamilton's work... I thoroughly enjoyed it and with two more sequels due, it's a solid and promising start.
FANTASY BOOK REVIEW
Not only a gripping SF crime thriller but a moving investigation into the limitations and capabilities of artificial intelligence.
GUARDIAN
All the rigour of a tightly plotted classic crime story with all the technicolour thrills of SF at its most gaudy. Wonderful.
LOVE READING
Fast and fluid, compelling and above all thoroughly enjoyable.
SF BOOK 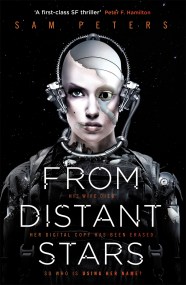